What Are The Seven Layers Of The OSI Model?

What Are The Seven Layers Of The OSI Model?

The Open System Interconnection is a reference model for how software applications communicate over a network. It is a conceptual framework that provides a handy visual design of how one layer is set on top of another. Its primary purpose is to guide technology vendors and developers to create digital products and software that easily interoperate.

OSI was developed by the International Standards Organization (ISO) in 1984 to promote a clear, standardized framework that defines the functions of telecommunications and network systems in use. The seven layers are:

In the OSI model, control is passed from the top to the bottom layers, one layer at a time, beginning with the application layer. Each layer handles a specific task in the data transmission and then passes it on to the next layer using the ‘pass it on’ principle.

Layers 1 through 4 are referred to as lower layers, and they are responsible for moving application data contained in the upper layers 5 through 7. Thus, the OSI model divides up the inter-networking task into a vertical stack of 7 layers, the top-most being the last and the bottom the first.

This article will discuss the seven layers of the OSI model in detail to help you understand what each does and how it relates to the rest of the model layers. 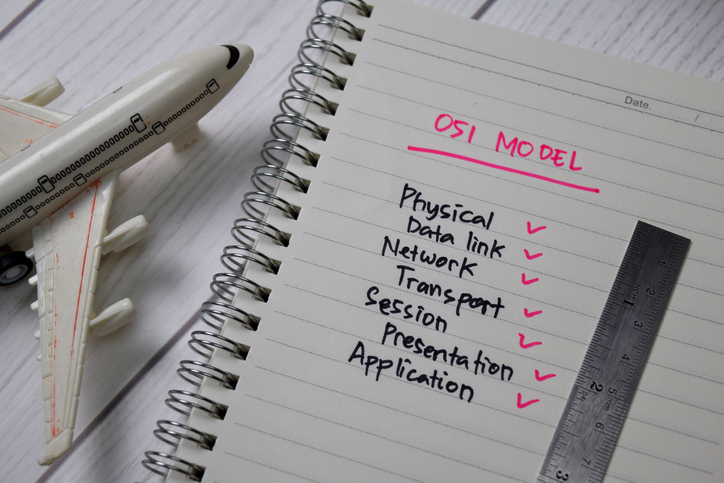 The application layer has full access and visibility into the network data. This means that the application layer uses an intelligent approach to balance loads on the level. A load balancer can assess and terminate network traffic, inspect network messages, carry out TLS/SSL decryptions, and make network routing decisions based on network content.

The presentation layer is also responsible for encrypting and decrypting data. It provides freedom from network data compatibility problems by standardizing raw data sent or received over the network. This layer is also known as the syntax layer.

Before communication between two networked devices is established, the session layer must create a network session first. The fifth layer of the OSI model handles session tokens and carries out authentication processes before data transfer is successfully initiated on the network.

This session layer also sets up, coordinates, and terminates connections between devices. Whenever there is a connection interference or dropped connections, the layer initiates and manages reconnection. It also manages dialogues between applications at each end of the network and measures how long responses take to get from one device to another.

As the name hints, the transport layer is responsible for how data is transferred from a host device to a node or system device on the network. This layer determines the destination to which data is sent on the network, how much data is transmitted, and at what transfer rate. The most popular example of the transport layer is TCP (Transmission Control Protocol) built over IP (Internet Protocol).

The session layer also establishes, manages, and terminates communication sessions with other lower layers of the OSI model. To streamline the data transfer process, optimize speed, and minimize data loss and dropped connections, it can set checkpoints during the data transfer.

The third layer of the OSI model primarily moves data between and through other networks. Network protocols work by packing data into packets labeled with the destination and source network address information. This layer is responsible for selecting the appropriate network routers and switches that create logical paths called virtual circuits that facilitate data transmission from one node to another.

The network layer handles the routing and forwarding functions. It also forwards data packets up the stack to the transport layer, addressing packets, packet sequencing, internetworking and error handling, and dealing with network congestion.

The Data Link Layer or DLL ensures that data sent over the network is transferred error-free from one node to another over the physical layer. This layer corrects any possible errors in the data and ensures that the rate of data transfer does not overwhelm the connections between the sending and receiving devices.

The data link layer can be further divided into two sublayers: the Logical Link Control (LLC) and the Media Access Control (MAC). The LLC sub-layer controls frame synchronization and handles error checking and flow control, while the MAC sub-layer controls how devices on the network access data and permissions to transmit them.

Layer 1 of the OSI model transmits data in a bitstream at the mechanical, electrical, or procedural level as electrical impulses, radio signals, or light. This layer determines how the physical connections to the network are established and how data is represented as predictable signals to be transmitted over a physical medium.

The physical layer of the OSI model includes everything used in networking – from wired cables and optical fibers to radiofrequency (Wi-Fi) and layout pins. Administrators often begin troubleshooting at the physical layer when there is a networking or data transmission problem, such as ensuring cables are properly plugged in or the router or switch is adequately powered.

Some experts in the IT field consider the OSI model outdated and even impractical, but it does not negate that it has been in use for close to four decades now. The main advantages of the OSI model are its security and network development capability.

It is easier to enable complex connections and data transfer of OSI models, and it is much easier to troubleshoot when there are data transfer or connection transfer problems. Visit the Intelice blog to discover more about computer networks and how they influence cybersecurity today. You can also contact us if you have any questions.