Credentials are the keys to the kingdom for businesses and huge quantities of them are floating around on the dark web. At this moment, more than 24.6 billion complete sets of usernames and passwords are currently in circulation on the dark web, which is four full sets of credentials for every person on Earth.

Gone are the days when the dark web conjured up images of hoodie-clad hackers who work on behalf of sinister organizations to coordinate trades in weapons or narcotics. The dark web has emerged as the seedy underbelly of the internet where cybercriminals can buy stolen critical business data, exposed credentials and the tools that facilitate cybercrime. The resources available on the dark web help cybercriminals plan operations and conduct attacks against businesses. As information floods into dark web markets and data dumps every day, the risk that a business cloud fall into trouble because dark web exposure grows every day.

The World’s Third-Largest Economy Is Booming

The dark web is replete with information that can damage businesses like stolen critical business information, ransomware, malware and hacking services. An estimated 60% of the information available on the dark web could potentially harm enterprises. Those commodities are commonly traded on dark web message boards. It’s the world’s third-largest economy, and it is growing fast. Cybersecurity Ventures estimates that the dark web will inflict about $6 trillion in damages worldwide in 2021, placing the dark web economy just behind the United States and China, the top two world economies.

Business data and exposed credentials are major revenue drivers and valuable resources for cybercriminals. Those commodities are sold, traded and harvested in dark web markets every day.  How does information like that make its way to the dark web? Through a variety of pathways, including:

The Market for Data Is Thriving

According to the 2022 Dark Web Product Price Index, the dark web data market has grown significantly in both the volume of data that is added, sold or traded and the variety of information that is available. It’s also grown more competitive. Many cybercriminals are offering discounts and other specials to lure potential clients these days. The most expensive item included in the data set is premium malware, which costs about $5,500 per 1,000 installs, However, bad actors can buy stolen data by spending less than $1, and sometimes it’s even free. Other data sets in the report include PayPal account details, Netflix logins and stolen credit card details (complete with a CVV) that are all available for less than $20. 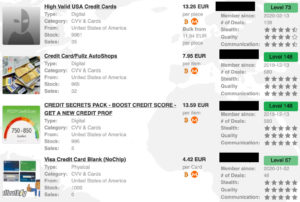 Credentials are the keys to the kingdom for businesses and huge quantities of them are floating around on the dark web. At this moment, more than 24.6 billion complete sets of usernames and passwords are currently in circulation on the dark web, which is four full sets of credentials for every person on Earth. Many of those credentials made their way to the dark web in the same way that other information does. Most commonly, exposed credentials end up in dark web markets after they’re stolen in a data breach.

Businesses are the primary targets of today’s nastiest and most lucrative cyberattacks. IBM named stolen or exposed credentials as the top cause of a data breach in a 2022 report. The sophisticated ransomware and other malware readily available also helps cybercriminals hold businesses hostage and make them dance to their tunes until the business pays up. Information about people and businesses plays a major role in the distribution of ransomware. Ransomware and malware are most commonly distributed through spear phishing, and cybercriminals make use of any data they can find about their target on the dark web to make their malicious message seem authentic and compelling to their victims.

Even without direct interaction with the dark web, organizations must be aware of their exposure to it. It is hard to prevent dark web infiltration but being aware and staying vigilant against it can lessen the damage. Being prepared before the worst happens with an incident response plan is important to ensure a business’s survival by minimizing damage and shortening the time it takes to get a victimized business back on its feet. However, nothing beats preventing that attack from happening in the first place. One of the most effective ways to do that is by engaging in dark web monitoring to find a company’s exposed credentials on the dark web and neutralize them before the bad guys have a chance to use them against that company.

Intelice Solutions has your secret weapon for continuous protection from dark web threats.

Complimentary with every Managed Services Agreement, Intelice watches every corner of the dark web, including more than 640,000 botnets, hidden chat rooms, unindexed sites, private websites, peer-to-peer (P2P) networks, internet relay chat (IRC) channels, social media platforms, black market sites, hacker forums and all of the places that cybercriminals do business 24/7/365. If one of your credentials pops up, we send alerts to you and make you aware of that credential compromise danger immediately.

The dark web search add-on finds every compromised credential your organization has out there in minutes, enabling us to eliminate those vulnerabilities fast. Plus, other add-ons enable businesses to monitor domains, executive personal email accounts, supplier domains and more!

Get your defenses ready for a new onslaught of password-related cybercrime risk. Contact our solutions experts today for a personalized demo to see how our risk protection platform can benefit your business.